From AGD 2016: Redefining Growth - from Wealth to Well-being

Douglas Beal is Global Leader, Economic Development at the Boston Consulting Group. He was at AGD 2016 and presented in the panel on "Growth Beyond Numbers" moderated by Academic Council Chairman Michael Spence.

Let me start with a question to all of you - which country do you think has been growing faster - China or Poland. Raise your hand if you think its China. Okay, how about Poland?

I've spent the last four years looking at 148 countries (plus Hong Kong) using 50,000 data points, and based on this research, it's actually Poland (that is) growing faster, and I am going to explain why.

I work with government leaders to improve their countries and cities. And about four years ago these leaders asked for a better way to measure progress - something other than GDP growth, because they believe that GDP growth isn't the best measure of progress because it doesn't include many things that really matter to all of us.

Like the freedom to speak your mind without fear of prosecution, or to let your child go outside to play without putting on a mask, and the confidence that the police are on your side - not the bad guys.

So together with my team at the Boston Consulting Group, we created a new way to measure progress more reflective of the 21st century.   We call it the Sustainable Economic Development Assessment - or SEDA.   And what SEDA measures is wellbeing.

But how exactly do you measure well-being?

We did a lot of research and spoke to a lot of people about what really mattered to them.  This resulted in 10 dimensions of wellbeing across 3 categories - shown in Figure 1. 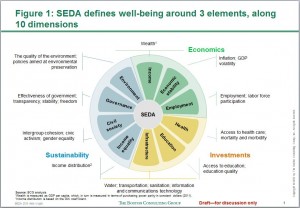 We undertook the massive task of collecting the data needed to measure these dimensions.  We then measured well-being along two time horizons - how each country is doing today, as well as the trajectory they are on.

We were very surprised by what we found.

On Figure 2 you see our 149 countries. Those at the top, like Norway, are doing well at overall well-being - all 10 dimensions combined. They are here for a range of reasons, but one thing they have in common is better scores in governance. But let's look at much of the  western, developed world, like France - they are on the upper left which means that while good, they are improving more slowly than the others. Most economists would tell you that less developed countries should catch up, so we actually expected this. 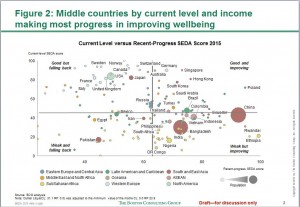 There is another set of countries, on the upper right, that are newer entrants to the good well-being club having shown strong recent progress and now good well-being - countries like Singapore, Korea and Poland, and even Hong Kong. And let's take a look at China - way to the right - one of the best countries at improving wellbeing.

One of the things that surprised me is how very few countries with low levels of well-being are making good progress - there are a few examples on the lower right, like Ethiopia and Rwanda - but not many. Instead, we see many countries on the lower left like Egypt and Pakistan with already poor levels of wellbeing falling further behind. 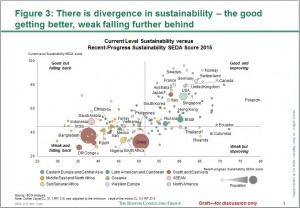 We don't ignore GDP. In fact, by correlating GDP growth with well-being improvements we are able to measure how well countries translate GDP growth into improved well-being.

On Figure 4, the dots on the line are countries where their improved wellbeing is to be expected given their GDP growth. 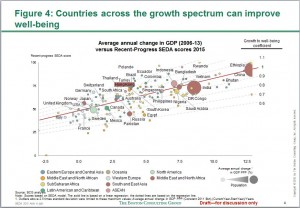 Earlier I asked you about China and Poland. China has been growing its GDP the fastest.  And we saw earlier that it is making rapid progress in well-being. So we might expect it to be a model for the world, right?  However, China is right on the line. Which means that it is average at translating its GDP growth to improved well-being, so it doesn't stand out anymore. Who does stand out?  You guessed it - Poland. Poland is in fact the best at converting its GDP growth to improvements in wellbeing, and indeed by our new measure growing faster than China.

I have lived and worked in many of the countries we have talked about today - including those performing well in SEDA and others not. And I have felt the difference - and it is so much more than a country's wealth.  It has to do putting the emphasis on things that matter to people.

I believe that if our leaders were measured on their wellbeing improvements, in addition to GDP growth, the world would be a better place.