The Impact of a Border Tax on the US Economy

James Bacchus, a member of the AsiaGlobal Fellows Faculty Committee, outlines the cost of a border tax for the US economy.

Speaker Paul Ryan and other leading House Republicans are pushing a tax plan that would exempt income from exports from U.S. corporate taxes, while denying deductions for the costs of imported inputs of goods and services into U.S. production. This proposed "border adjusted tax' could cause cascading harm to U.S. consumers, workers, manufacturers, retailers, and indeed, the entire U.S. economy.

In effect, this so-called BAT would tax imports and subsidize exports. It would discriminate against imported products by denying them equal competitive opportunities with like domestic products in the U.S. market. At the same time, it would help U.S. exports shove aside competing products in foreign markets. Sound good? A brief recollection of Economics 101 suggests otherwise.

Almost any economist will say that the purpose of trade is not to export but to import. Why make or do for ourselves something we can pay others to make or do for us for less cost, freeing us to use our limited time and limited resources to make and do what we can make and do relatively better than others?

This basic economic principle - called "comparative advantage" - is the same whether we import by buying a good or a service from next door or from the next neighboring country. The wealth of nations - including our own - is maximized when we pursue our comparative advantage. Yet this fundamental premise for producing more national wealth in the form of more competitive jobs and more competitive industries is overlooked in the "border adjusted tax."

What would happen if the BAT were enacted? Higher consumer prices would hurt us all, and they would hurt lower Â­income consumers the most. Higher costs due to the loss of tax deductions on imports would send prices skyrocketing at the nearby grocery or big box store. And higher costs for imported inputs of goods and services would raise the prices of thousands of U.S.Â­made products, diminishing their competitiveness in both U.S. and foreign markets.

Some early predictions should give us pause about the impact of a BAT. Among these predictions, the taxes due from U.S. companies reliant of imports could exceed their profits, the retail price for gasoline could increase by 30 cents per gallon, and the average cost of a car could increase by $3,300. Moreover, with taxes used to rig the U.S. market against imports, America would not gain jobs. Instead, many Americans would lose their jobs.

As Anne Krueger, former chief economist for the World Bank, has explained, many U.S. jobs are directly connected to imports and therefore depend on imports, and still more U.S. jobs are created and supported by imports because using cheaper (and sometimes better) imports as inputs enables American manufacturers to compete more effectively with foreign firms in the U.S. and worldwide.

Furthermore, low-cost imports do not destroy American jobs. Companies that become more competitive by importing at lower costs can afford to expand at home and abroad, and thus, to create more jobs. In sum, Krueger concludes, "Without imports, many jobs that exist today would disappear." And still more American jobs would never be created.

There is also the little matter that the proposed "border adjusted tax" would violate U.S. treaty obligations as a member of the World Trade Organization. Why should we care? One reason why we should care is because - if we chose not to comply with a WTO ruling against the BAT - we could then face the loss of current trade benefits guaranteed by the WTO treaty for American workers and producers to the tune of billions and billions of dollars - annually.

President Trump has sent conflicting signals lately about whether he supports a "border adjusted tax." He would be best advised to oppose it  - and to advance, instead, policies that value imports as well as exports as part of an economic policy that reflects an understanding of the vast value of international trade to the prosperity of the American people.

James Bacchus is a former chief judge of the World Trade Organization, a former member of Congress from Central Florida, and author of the book Trade and Freedom. He chairs the global practice of the Greenberg Traurig law firm. He is also  a member of the AsiaGlobal Fellows Faculty committee.

This article first appeared in the Orlando Sentinel as Border tax would smack U.S. economy with higher prices, fewer jobs on April 10, 2017. The views expressed in the reports featured are the author's own and do not necessarily reflect Asia Global Institute's editorial policy. 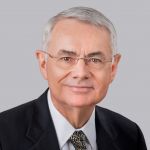