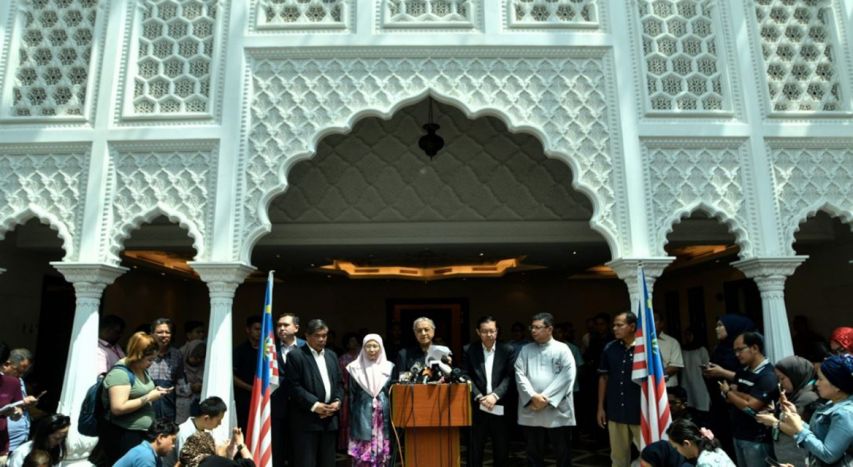 Now Mahathir must heed Malaysians’ wish for change – by protecting the rule of law, for a start

Andrew Sheng, Distinguished Fellow of Asia Global Institute, says there is a clear trend of urban voters moving away from religion-based politics to vote for improvements in economic livelihood. To safeguard his legacy, Mahathir must manage a generational change in Malaysian politics

Most Malaysians like myself went to bed in the early hours of Thursday morning after hearing the news that the Pakatan Harapan (Alliance of Hope) coalition of four parties had won a simple majority of the 222 parliamentary seats contested in the general election. It was earth-shattering news that the Barisan Nasional government that had ruled Malaysia for 61 years is now the opposition.

Ninety-two-year-old Dr Mahathir Mohamad has just been sworn in as the seventh prime minister of Malaysia, after having served 22 years as the fourth prime minister, from 1981 to 2003. In 2016, he quit the United Malays National Organisation (Umno), the leading component of the Barisan government, to form his own party, aligning himself with the opposition.

The election itself was orderly and surprisingly quiet, since there were few of the usual rumbustious rallies that featured in past elections. The Malaysian electorate has become more mature – cautious, yet bold in voting for change.

There will now be a period of political crossovers in which each party tries to bolster its majority at the parliamentary and state levels. The aftershocks of the election are not over by any means.

First, it was clear that the urban voters swung decisively to the Pakatan coalition. This has been a trend in recent years as the urban population increased with the rural-urban drift. Umno has traditionally depended on the rural vote for its support, but relied on its urban partners, the Malaysian Chinese Association (MCA), Malaysian Indian Congress (MIC) and Gerakan (People’s Movement Party) to bolster the urban vote.

This time round, the MCA, MIC and Gerakan were almost wiped out at the polls, with the MCA and MIC party leaders losing their seats and Gerakan winning no seats at all.

This meant that the decisive gains were achieved in the more densely populated states in the west coast of Peninsular Malaysia, particularly with stronger majorities in Penang and Selangor, Negeri Sembilan and Johor. The last was the birthplace and stronghold of Umno, but this time round, even the highly respected veteran MP for Johor Bahru, Shahrir Abdul Samad lost heavily.

What was pivotal was the voting in the two Eastern states of Sabah and Sarawak, which together carried 56 parliamentary seats and were considered safe “deposits” on which Barisan could rely to carry a majority. In the end, Pakatan and its ally, Parti Warisan Sabah, took 24 parliamentary seats.

Secondly, Parti Islam Se-Malaysia (PAS), the Islamic party that focuses largely on religion, took back the East coast state of Terengganu, so that it once again controls two states (Kelantan and Trengganu). It was clear that Parti Amanah Negara, the breakaway faction that is now part of the Pakatan coalition, was not able to draw away sufficient hard-core votes to weaken PAS.

However, the rise of Pakatan shows that urban Malays wanted improvements in economic livelihood, rather than voting along religious affiliations. The non-Malay voters were also put off by PAS’ push for hudud laws, a Muslim penal code, and were uncomfortable with Umno’s flirting with PAS on areas touching on religion.

Thirdly, this general election brought more new talent into politics. One weakness of multi-party politics is that under conditions of uncertainty, the tendency is to rely on recycled politicians, rather than experiment with younger professionals. The new government has the opportunity to engage in generational renewal by bringing younger leaders from more diverse backgrounds into positions of authority.

Mahathir has promised to stay on as prime minister for two years, before passing the baton to Anwar Ibrahim, who is now in jail but expected to receive a royal pardon and be freed soon. Nothing signals more the restoration of the rule of law than his immediate release.

To safeguard his legacy, Mahathir now has a historic opportunity to address many of the issues that festered when he was prime minister the first time round.

On the economic front, he has inherited an economy that grew by 5.9 per cent last year, but, as the saying goes, the GDP numbers look good, but the people feel bad.

With oil prices back up to over US$70 per barrel, and Malaysia as a net energy exporter, the economic winds are favourable for making the necessary tough reforms.

How to create good jobs in an age of robotics, even as more youths enter the labour force, is a pressing challenge not just for Malaysia, but throughout the developing world.

On the foreign affairs front, Malaysia will have to navigate the growing tensions between the US and China. Given his feisty style, Mahathir has not been known to mince his words about what he thinks on issues, including the South China Sea.

Malaysia has voted for a generational change, but with the world’s oldest prime minister managing that transition.

Most new governments get very short political honeymoons, as expectations are now high on delivery. It is always easier to oppose than to propose and implement.

How smoothly that transition occurs will have a huge impact not only for Malaysians, but for the region as a whole.

This article first appeared in the South China Morning Post on May 11, 2018. The views expressed in the reports featured are the author's own and do not necessarily reflect Asia Global Institute's editorial policy.