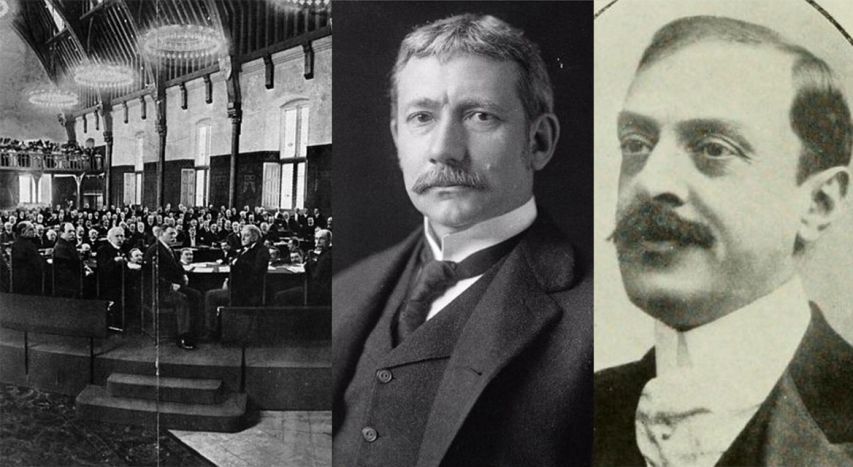 The governance gap between the US and China - the former focuses on the rule of law, the latter on the rule by the Communist Party - suggests differences in their perceptions of the nature of a rules-based international order. Zhiwu Chen, Director of Asia Global Institute, says that this disconnect can be better understood by looking at how, at the beginning of the 20th century, lawyer-diplomats took over from military generals in negotiating international treaties.

Founded on the principle of the rule of law, the United States is largely governed by lawyers, though not as much as decades ago. The percentage of lawyers in the US Congress has dropped from about 80 percent in the 1800s and about two-thirds of the total in the 1970s. For what appears to be the first time ever, legislators with a legal education now account for fewer than half the seats in the House of Representatives and the Senate combined. Though just two of the previous seven American presidents had law degrees, more than half of the 45 chief executives have been lawyers. The legal profession clearly still dominates the US public sector.

By contrast, China is based on the rule of the Communist Party, not the rule of law. At the operational level, it is bureaucrats and professionals, many with training in economics, not legislators or lawyers, who make the country function. This difference in governance model is clearly reflected in the make-up of the American and Chinese trade negotiating teams: highly skilled lawyers in charge on the US side; experienced economists on China’s.

This asymmetry is important not only for understanding the dynamics of the ongoing US-China trade war but also for analyzing the implications for future interaction and the kind of world order that may emerge. To appreciate this, consider how the rules-based international order of the 20th century was established and the central role that officials with legal training played.

Generals as diplomats in a gunboat-based global order

Prior to 1907, it was accepted practice for a creditor country to use military force to attack a debtor country if and when the latter would default on its debt owed to nationals of the former. This practice was particularly common in 19th century Latin America where economies were developing at a rapid pace, with Europeans providing much of the capital. According to Martha Finnemore in her book The Purpose of Intervention, in 1838, France sent naval ships to Vera Cruz to collect debt owed to French investors by Mexico. Then, between 1861-1863, France, Britain and Spain sent 9,200 troops to attack Mexico to recover debt owed. There were a number of other episodes of forcible cross-border debt collection by European states.

Why were gunboats an accepted means to enforce investment rights across national borders? An obvious reason is that there was and, to a large extent still is, no higher authority that could enforce agreements, contracts and obligations between nations. No world government or court with coercive power existed to force nations to comply. As a result, creditor states had to take international enforcement into their own hands. The consensus among European countries was that they had the right to use military force to recover debt and protect their citizens’ investments.

Britain and Germany’s military intervention in Venezuela in 1902 stirred up debate about debt collection by gunboat. Venezuela had borrowed heavily in Europe to help fund railroad construction projects – and then defaulted. In December 9, 1902, British and German gunboats blockaded five of the country’s key ports and sank several Venezuelan vessels. Under pressure from the attack, Venezuela agreed to have the Permanent Court of Arbitration (PCA) in The Hague take up the matter. The Court ruled that not only was the military intervention by Britain and Germany justified but also that the blockading powers had first right to payment over other creditor countries that decided to seek a peaceful resolution. The judgement had rewarded violence and encouraged states to eschew diplomacy and rely instead on military force.

While this approach to achieving cross-border property protection gave international investors a better sense of security, the resulting gunboat-based world order gave no justice to weaker states. As Finnemore explains, part of the reason that the European powers and others accepted such an order is that until the late 19th century, there were not many legally-trained diplomats or lawyers representing their countries in international negotiations and conferences. For example, when European states and kingdoms, as well as Brazil, Mexico and the United States, gathered to negotiate the First Geneva Convention for the Amelioration of the Condition of the Wounded in Armies in the Field, almost every country’s delegation was composed of military generals and medical professionals, with hardly any lawyers present. To military officers, using force to collect debt was a right, an acceptable means of restitution.

The PCA’s decision on the Venezuela case prompted Argentina’s foreign minister, Luis María Drago, to write a memorandum to his country’s ambassador to the US on December 29, 1902. A lawyer, Drago laid out comprehensive legal arguments that the collection of debt by a sovereign state was not legitimate grounds for the use of force against another sovereign state. States, he reasoned, could use force against other states only in self-defense, and that treating forcible debt collection as a sovereign right would put the weak states at the mercy of the strong and render their independence and sovereignty meaningless. Drago’s document circulated widely in Latin America and in US legal circles – and was well received.

When Elihu Root became the US secretary of state in 1905, the Drago Doctrine became a norm in US foreign policy. Root graduated from New York University Law School in 1867 and practiced law before serving in government. His professional training and legal experience meant that he was receptive to Drago’s legal arguments. One of Root’s priorities was to end cross-border debt collection by force and replace the practice with an international treaty.

At the Second Hague Peace Conference in 1907, powerful European creditor states agreed to forego the right to military intervention for debt recovery. This was a milestone in international diplomacy, Finnemore argues. “The case is particularly puzzling, because this is an instance where the arguments of the weak triumph over the arguments of the strong, where the weak are able to persuade the strong that protection of the weak is in their best interests.”

The breakthrough happened because most delegates and negotiators at the Hague Conference were lawyers, something that had never occurred before. Much like the negotiating team that Robert Lighthizer, the US Trade Representative, leads today, the American delegation of more than a century ago was dominated by prominent lawyers including Joseph Choate (delegation head), Uriah Rose, James Scott, and David Hill. The members of the European delegations were also mainly lawyers. The head of the British team, Sir Edward Fry, was a judge on the English Court of Appeals from 1883 to 1892. The head German delegate was a public prosecutor, while the second-ranking official was a legal scholar. The heads of the delegations from Austria, Belgium, France, Holland and Russia were all either lawyers or legal scholars. Even Drago himself was there.

The switch in negotiators from military generals to lawyers provided a natural foundation for the international order to shift from one based on the use of force by gunboat to one based on rules. The treaty that resulted from the 1907 Hague Conference marked the first important step towards building the rules-based international order of the 20th century which is in place today.

The character of a country’s internal governance system determines the type of representatives it sends to the international stage to negotiate trade deals and do other things. In turn, this character has a significant bearing on the nature and structure of the kind of international agreements and, more generally, of the international order that the country prefers.

As discussed in my AsiaGlobal Online article “Could the US and China Have Avoided Escalating Their Trade War?”, which was published on June 6, 2019, China has since 1978 made tremendous progress in legal development and is gradually moving closer to becoming a rule-of-law nation. Its international negotiating teams for trade and other issues will eventually include more representatives with legal sophistication since policymakers realize that this is the best way to protect China’s interests in a rules-based world order.

In the first part of Zhiwu Chen’s analysis, he asks “Could the US and China Have Avoided Escalating Their Trade War?”

This article first appeared on AsiaGlobal Online on June 11, 2019.