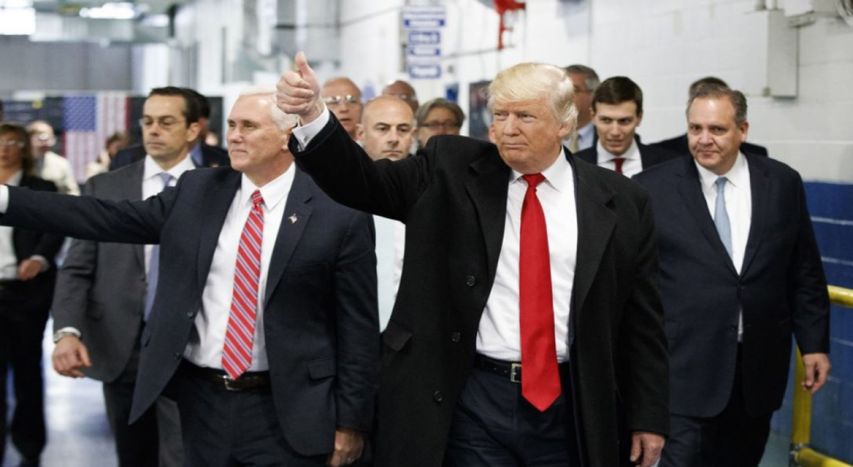 Donald Trump has a point – even with advanced technology, manufacturing is essential

Andrew Sheng, Distinguished Fellow of Asia Global Institute, says economies have to proceed through a manufacturing-focused phase, even if they switch to a service-oriented approach later, if they want to continue innovating. Advances in robotics and artificial intelligence will not change this.

Spring is the season of big meetings – Davos, Boao and, coming this weekend, the Spring Meetings of the IMF/World Bank in Washington. Here, the Davos men (and increasingly women) gather with the central bankers, ministers of finance, bankers, policy wonks and academics to debate the state of the world. These are often casts of thousands, listening to the latest guru expounding on technology, politics, trade and finance.

I was at a conference in Italy last week, where the mood was dominated by news of the US-China trade war, better described as the opening skirmishes with more posturing than action. The underlying worry was whether the unfolding war would result in more collateral damage and have a bigger impact on everyone else.

Italy has just emerged from a confusing election result with no clear consensus about who will form the next government. The Hungarian election results this week showed that, in Europe, far-right populist sentiments are gathering momentum. In France, reformist President Emmanuel Macron is now battling the railway unions to get serious labour reforms going. This is a reminder of how Margaret Thatcher took on the British unions in the early 1980s and won.

Unfortunately, there are no Thatchers left in the United Kingdom, only the messy aftermath in which a divorcee is left holding a very large bill. One guru gloomily forecast that Britain may soon have its first Marxist prime minister in Labour leader Jeremy Corbyn.

The IMF traditionally offers an important World Economic Outlook forecast at the Spring Meetings. This year, the basic outlook is expected to continue the fairly bullish view of a broad-based worldwide recovery with notable upside surprises in Europe and Asia. This week, IMF managing director Christine Lagarde exhorted Asians, who account for almost two-thirds of global growth, to “fix the roof while the sun is shining”.

Basically, she saw the three big holes in the roof: protectionism, financial/fiscal risks and social inclusivity. In a sense, all three gaping holes are the consequences of policies that failed to address the global financial crises of 2007-09. Protectionism has arisen because advanced countries did not adequately take care of their working and middle classes. Global debt has risen 40 per cent since the crisis, because governments used money to bail out banks or pumped more into welfare and military spending that did not raise productivity. Financial risk is at its highest ever because the lowest-ever interest rates created huge asset bubbles.

If you’ve squeeze the wages of the middle class, and then paid zero interest rates on their bank deposits, while house prices become unaffordable, are you surprised when income and wealth inequality worsens?

Lagarde is basically correct that policymakers face a stark choice: either copy the policies of the past or paint a new economic landscape – open fair trade, safer financial systems and digital revolution for all.

In Trumpian terms: can you drain the swamp and fix the roof at the same time?

The newly published IMF World Economic Outlook asked the question of whether manufacturing will continue to be a jobs creator?

I have argued that East Asian economies are already beginning to use the opportunity of new technology to make an important leap forward in labour productivity and income growth. Moving beyond the middle-income trap means pushing real wages higher so that businesses will invest in higher labour productivity through technology and skills training. The International Federation of Robotics has forecast that, by 2020, there will be 3 million industrial robots operating globally, with 1.9 million in Asia, and China accounting for 950,000.

Asia’s speed of installation of robotics and artificial intelligence means the door for cheap-labour growth strategy in manufacturing in Africa, Latin America and labour-surplus economies is closing.

But why is manufacturing so important for growth strategy?

The IMF study argues that, in many countries, manufacturing has faded as a source of jobs, especially in advanced economies. In developing economies, service jobs are starting to replace jobs in manufacturing. This shift to the service sector is an inevitable “structural transformation”.

The more important question is whether an emerging market can leapfrog into the higher-earning services sector, skipping the manufacturing phase. The East Asian experience suggests otherwise.

One tends to forget that both Hong Kong and Singapore were initially manufacturing centres. As Hong Kong labour became more expensive, the shifting of manufacturing across the border to southern China was mutually beneficial. Today, the Chinese economy is building on its manufacturing prowess towards more value-added services. India, without that supply chain advantage, finds the transition much harder.

Why is the Trump administration so concerned about onshoring of manufacturing in America? The answer is that, when you focus exclusively on services, you lose manufacturing skills critical for the prototyping of new products and services. This explains why Shenzhen has become the prototype centre of the world, with some of the best manufacturing craftsmen and engineers, who can take an idea and turn it into reality.

The Chinese philosopher Wang Yangming concluded that “knowledge and action are one”, meaning that knowledge on paper is useless on its own. It has only value through practice.

We should therefore be sceptical of the view that it may be possible for some economies to bypass the traditional industrialisation phase for the services area. You can never run before you can walk.

Only economists can fix roofs without building a ladder.

This article first appeared in the South China Morning Post on April 13, 2018. The views expressed in the reports featured are the author's own and do not necessarily reflect Asia Global Institute's editorial policy.