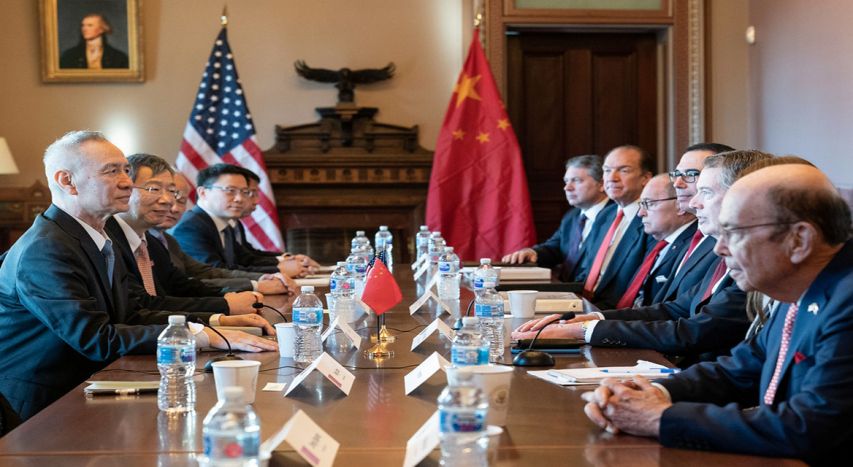 Could the US and China Have Avoided Escalating Their Trade War?

Zhiwu Chen, Director of Asia Global Institute, says that the rise in trade tensions between the US and China may be due to the American side’s failure to appreciate the implications of China’s not being a rule-of-law country – that administrative action, not laws on the books, get things done in China.

The US and China are in the middle of a tit-for-tat escalation of their year-long trade war. The first eight rounds of negotiations pushed the two sides close to a deal, but the ninth led to a dramatic reversal, with both raising tariff rates on the other’s exports. Then, on May 15, 2019, the US Department of Commerce put Huawei on the Entity List, banning it from accessing American suppliers and effectively launching a technology war against China. In response, China set off a large-scale propaganda campaign, instructing all major TV networks to play anti-American movies from the Korean-War era to prepare the public for a “New Long March” against the US.

Besides the ratcheted-up rhetoric, China signaled that it could impose restrictions on rare-earth exports to the US. The State Council issued a strongly-worded white paper on “China’s Position on the China-US Economic and Trade Consultations”, while the Ministry of Commerce began to prepare a retaliatory Unreliable Entity List to target American firms.

Through the tenth round of talks that ended on May 10, the US side had controlled the agenda, while the Chinese team was mostly responding and making as many concessions as they could, eager to close a deal. After President Donald Trump’s much publicized May 5 Twitter threat to raise tariffs, however, the distrust and acrimony have been escalating fast, even though both sides realize that neither would win in a worsening trade war.

How did we get here? Could this escalation have been avoided? Yes – if it were not for a critical cultural gap.

Lawyers vs economists as negotiators

As widely reported, a key trigger for the falling out was the US side’s insistence that some agreed terms be cemented in Chinese law, whereas the China side was only willing to abide by the terms through regulatory and administrative action. Was that difference in position worth the resulting dramatic reversal, with both countries pulling back from making a deal? Not from the Chinese perspective.

The core American team consists mostly of experienced lawyers. Robert Lighthizer, a JD (Juris Doctor law degree) from Georgetown University, was a practicing lawyer/partner at Skadden, Arps, Slate, Meagher & Flom LLP before joining the Trump administration as the US trade representative (USTR). His deputy for Asia, Europe, the Middle East, and industrial competitiveness, Jeffrey Gerrish, was also a partner in the same law firm for more than 20 years. Acting Assistant US Trade Representative for China Affairs Terrence McCartin, a JD from Georgetown as well, practiced law for more than 10 years. There are at least three other JDs who have taken part in the negotiations on the US side. Well trained and highly experienced practitioners, these lawyers are particularly skilled at imagining all possible scenarios and specifying corresponding remedies and actions as a complex agreement is worked out.

By contrast, all known members of the Chinese team majored in economics and related fields when in college or graduate school and none of them has formal legal training or practiced law. It is thus not surprising that they are professionally more comfortable speaking in general terms than about detailed and nuanced scenarios and contingencies. Lawyerly talk is like a foreign language to them.

This difference in professional background between the two teams led to a large gap in understanding of the importance of legislative action to enforce terms. To American lawyers, regulatory and administrative action does not mean as much as laws that are a result of a long legislative process and that are enforced by the judiciary.

The US team probably did not fully appreciate the implications of China’s not being a rule-of-law country – that administrative action, not laws on the books, get things done in China. Ask any Chinese on the street whether laws or administrative action is more effective in enforcing trade agreements, and without doubt most if not all would say the latter.

Failure to understand the asymmetry in governance structure and political culture between the US and China has to some extent fueled the distrust between the two sides: The US side interpreted China’s refusal to change relevant laws as evidence of a lack of sincerity and commitment, whereas the China side viewed the American insistence on legislative action as putting emphasis on something that would be less useful for enforcement but more publicly humiliating. Hence, the breakdown.

It is no secret that China is not yet a rule-of-law country in the way that the concept is applied or understood in the West. But there has been remarkable progress towards that long-term goal. During the Cultural Revolution in the 1960s and 70s, there were neither lawyers nor law schools, while no one paid attention to any laws if there were any. When reforms started in late 1978, a few law schools re-emerged. The first generation of post-Cultural Revolution lawyers came out of college and began their professional careers in 1981. By the end of that year, there were only 6,213 lawyers in China.

Throughout the 1980s, most Chinese had no idea of what a lawyer was or did. Those that did were likely to have had a negative perception of lawyers because they used the law to defend bad people. By 2011, there were 192,546 lawyers in the country. By the end of 2016, China had 26,000 law firms, with more than 325,000 licensed lawyers, about half the size of the American legal sector (China’s population is nearly five times as large as that of the US).

The increase in the number of lawyers does not mean that China has become a country governed by the rule of law. The professional qualifications of judges and the decision-making structure of the courts are what matter. In the 1980s and 1990s, Chinese courts (except for those in major cities such as Beijing and Shanghai) were stacked mostly with retired military officers. The reasoning behind this was simple: The courts were not that important anyway; local governments were responsible for providing employment for military veterans, and these retirees were probably good people. Whether they had any legal education or experience was not a concern.

With the increased downsizing of the People’s Liberation Army (PLA) in recent years, the practice of recruiting retired military officers to be judges has gained traction once again, despite a 1995 law that requires every judge to have at least a college degree and pass the national legal-knowledge test. To understand how law is practiced, consider the educational backgrounds of the chief judges who headed each of the 31 provincial high courts across China at the end of 2013: Of the total, only one had passed the national test and was qualified to practice law and only 11 had a law degree.

Over the past four decades, China’s legislature, the National People’s Congress, has passed hundreds of statutory laws, many of which contradict each other. It is impractical to take all these laws on the books at face value. As the Constitution of the People’s Republic of China states, the nation is based on the rule of the Communist Party, not the rule of law. Against this institutional background and governance culture, the Chinese trade negotiators understandably put more faith in enforcement via administrative and regulatory action than on laws passed by the legislature. The American negotiators can, of course, push China to implement market reforms faster. As for the legislation they have been demanding China pass, even if such laws were agreed and made it on to the statute books, they would deliver less compliance than administrative and regulatory measures which are still the mainstay of Chinese governance.

This article appeared in AsiaGlobal Online on June 6, 2019. The views expressed in the reports featured are the author’s own and do not necessarily reflect Asia Global Institute’s editorial policy.