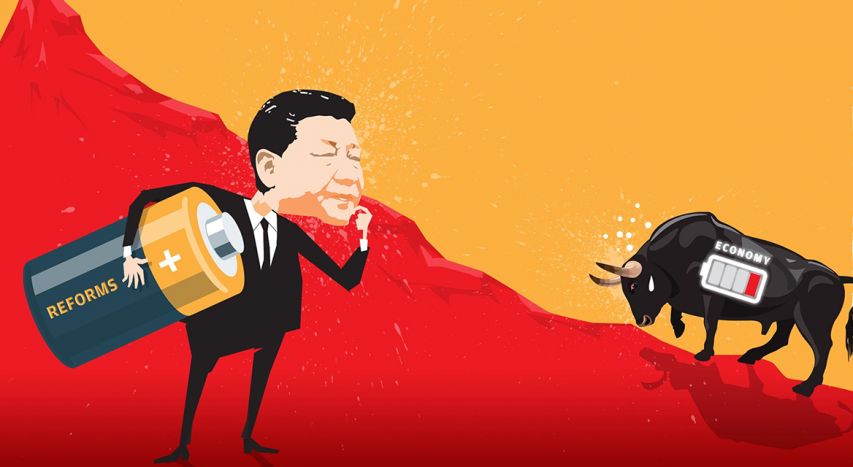 China has a chance to kick-start its economic reforms, but will Xi Jinping push ahead at key meeting?

In an article on China’s economy in the South China Morning Post, Zhiwu Chen, Director of Asia Global Institute, is quoted that Washington has increasingly viewed China as competitor or even a threat to western values and institutions. It is important for President Xi to convey a pro-market message to reduce strategic suspicion from other countries. Noting that a re-emphasis on market reforms could help to shore up entrepreneurs’ confidence at home, Zhiwu Chen believes it is time for China to get back on the track of focusing on development. He also points out that all China has been focusing so far is to woo inflows - the limitations of China’s “one-way street” opening of access to its financial markets.

An annual gathering of hundreds of top Chinese leaders this week could provide new impetus to the country’s largely halted market-oriented reform process as Beijing is in need of serious structural changes to move its debt-ridden economy forward, analysts said.

However, Chinese President Xi Jinping is not expected to relinquish any significant control over how the country is run during the meeting of high-ranking officials, even if he does agree to some economic reforms.

The fourth plenary session of the 19th Central Committee of the ruling Communist Party will take place at a critical time for Xi as obstacles to China’s economic growth – from the trade war with the United States o a rise in labour and other costs – are increasing, potentially threatening a key source of the ruling party’s legitimacy: delivering economic prosperity.

The closed-door meeting, which will last four days from Monday, will offer Xi the chance to respond to concerns that he is scaling back the pragmatic approach to governance that was one of the most important legacies of China’s late paramount leader, Deng Xiaoping.

Xi will use the session, which will be attended by around 400 delegates including top leaders, local governors and military top brass, to tell the country and the world his vision for the direction of the Chinese economy. This is set to focus on if China will follow an increasingly state-led model with frequent government interventions or will be a more open economy with a restrained state role that allows private and foreign businesses to thrive.

Wu Jinglian, one of the key thought-leaders behind the idea that China can embrace a vibrant free market system that does not challenge the Communist Party’s grip on power, published a 12,000-word article earlier this month that reviewed China’s economic history over the past seven decades.

It urged the country’s leaders to embrace market-oriented reforms and a rule of law economic system, with the 89-year-old economist and renowned government adviser writing that Beijing must honour its commitment made in a blueprint published at the end of 2013 when the government promised to let the market played a “decisive” role in economic activities.

Wu wrote, in the article published by Caixin magazine, that the 2013 document had already put an end to the debate whether China should embrace a rule-based mature market economy or go back to the old days of a full “command economy”.

In the process of implementing market-oriented and rule of law changes, there will be various types of resistance and obstacles from people with old mindsets and from vested interest groups - Wu Jinglian

“But the right decision, or even the right action plan, is just the first step in promoting reforms,” said Wu. “In the process of implementing market-oriented and rule of law changes, there will be various types of resistance and obstacles from people with old mindsets and from vested interest groups.”

The Chinese leadership, headed by Xi, also stated in the 2013 document that the overall goal of the government’s reform plan was “improving the system of socialism with Chinese characteristics, promoting the state governance system as well as modernising governance abilities”. The particular line from the report has been chosen as the official theme of the plenum gathering.

At the core of Xi’s effort to modernise Chinese governance is ensuring that its vast centralised authoritarian ruling apparatus can keep up with increasingly rapid changes in its society and the economy. The urgency to bolster governance comes as China’s economic model has lost some its magic, with the country’s growth rate having slowed to its lowest level since records began almost three decades ago amid the US trade war.

Some analysts see the trade war with the US as putting pressure on China to adopt reforms that it would not have considered under normal circumstances. Others disagreed, saying that the pressure from the trade war was prompting Beijing to increase self-reliance based on its state controlled economic model.

The trade war has exerted pressure by making Beijing realise that the existing way of conducting trade and tech interactions with the US (and perhaps other trading partners) is creating more conflicts than benefits, and urgent changes are needed to avoid further backlashes - Aidan Yao

“The trade war has exerted pressure by making Beijing realise that the existing way of conducting trade and tech interactions with the US (and perhaps other trading partners) is creating more conflicts than benefits, and urgent changes are needed to avoid further backlashes,” Aidan Yao, senior emerging Asia economist at AXA Investment Managers, said in a message to the South China Morning Post.

“Not defusing these conflicts could exacerbate the economic slowdown and undermine confidence of global investors in China that could ultimately hold back Beijing’s push to integrate its capital market into the world and internationalise the [Renminbi]. In other words, the pressure comes in both short-term (slower growth) and medium-term (holding backing structural changes) forms.”

Rory Green, an economist from TS Lombard, an independent investment research firm, agreed that initially the trade war put pressure on China to reform in a similar manner to the country’s accession to the World Trade Organisation (WTO), but the effect of that pressure has reversed as the conflict has continued.

“The perceived insincerity of US negotiations and the broadening of the conflict to tech and financial sectors has given the hardliners in Beijing ammunition to fight against reformers,” Green said. “Our understanding of the consensus in Beijing is that the top leadership expects a protracted period of strategic competition with the US.”

As a result, Beijing would only make limited concessions that were in China’s long term interest, he added.

“The hardliners are firmly in charge of the policy agenda,” Green said.

Statistics suggest Beijing’s reliance on the state sector continues to grow. At the end of last year, the total net assets of the government, public institutions, state firms and state banks amounted to 96 per cent of gross domestic product, up 5 percentage points from 2017, according to State Council data.

“If anything, the trade war and the risk of a further decoupling with the West is encouraging officials to devote more resources to becoming self-sufficient in key products such as semiconductors and therefore less reliant on imports,” according to Julian Evans-Pritchard, senior China economist at consultancy Capital Economics. “Meanwhile, even state firms that don’t receive direct government subsidies will continue to benefit from their implicit state backing when seeking access to resources and credit.”

Chen Zhiwu, director of the Asia Global Institute at the University of Hong Kong, said Xi needs to convey a pro-market message to reduce “strategic suspicion” from other countries at a time when Washington increasingly views China as competitor or even a threat to western values and institutions.

While China’s president and his US counterpart Donald Trump are expected to sign a temporary trade truce next month at the Asia-Pacific Economic Cooperation summit in Chile, the rivalry is only likely to intensify in the years ahead, challenging Xi’s ambitious goal of making China’s a powerful socialist country by the year 2035.

“It’s time [for China] to get back on the track of focusing on development and economy,” Chen said, noting that a re-emphasis on market reforms could help “to shore up entrepreneurs’ confidence” at home.

Beijing’s emphasis on party leadership and state-owned enterprises in recent years has alienated China’s nouveau riche – private business owners and urban middle class professionals. A survey released last month by the Hurun Research Institute, a China-based wealth research firm, and Visas Consulting Group, an immigration advisory firm, found that over a third of rich Chinese “are currently considering” migrating to another country based on interviews with 224 citizens with an average wealth of US$4.5 million.

While China’s official data shows a steady inflow of foreign direct investment, there is no shortage of news indicating that big-name foreign investors, particularly in the manufacturing sector, are leaving China due not only to the impact of trade war tariffs, but also the sharp increases in the cost of labour, land and resources.

There are, though, signs that the Chinese government has taken notice, stepping up its efforts to assure foreign investors.

First, Xi told a multinational corporate investment fair in Qingdao last week that China’s door will only be opened wider to foreign firms. The Chinese government has also endorsed a new regulation intended to “optimise the business environment”, which will come into effect at the start of next year along with China’s new foreign investment law, promising less red-tape and state intervention.

Beijing is also allowing foreign financial firms to take controlling stakes in their China joint-ventures, while making it easier for foreign investors to buy and sell onshore stocks and bonds.

However, the jury is still out whether the steps China has taken so far will be sufficient to persuade foreign investors to increase their presence.

Chen, who formerly taught at Yale University and is now with the Asia Global Institute at the University of Hong Kong, said China’s “one-way street” opening of access to its financial markets – focused on wooing inflows while restricting outflows – would have its limitations.

Mao Shoulong, a public administration professor at Renmin University of China in Beijing, said the plenary session would not touch specific economic subjects, although it can form a “political consensus” over how the party leads the state and how the state manages social and economic affairs, which will affect the business environment, government-business relations, as well as protection of private property rights.

He noted that the power to initiate economic reforms is now concentrated in the leading government groups, headed by Xi, a far cry from the past when local governments or even companies were able to experiment with new practices.

“We are now entering a stage where concentrated reforms must be carried out,” Mao said.

Michael Hirson, Eurasia Group’s director for China and Northeast Asia, predicted Xi will not ease the Communist Party’s control as it is “an essential tool for China to accomplish its continued rise as an economic and military power, and also fundamental to his view on governance.”

This article first appeared in SCMP on October 28, 2019. The views expressed in the reports featured are the author’s own and do not necessarily reflect Asia Global Institute’s editorial policy.